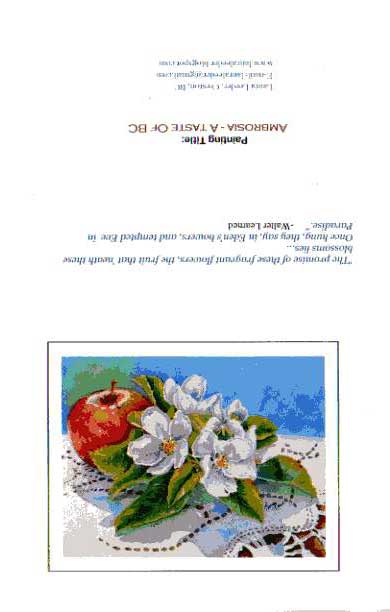 Today, in the mail, I received a beautiful gift from fellow blogger, Laura Leeder. I was one of the winners in her note card give-away. Here is the beauty that I received: I put the card through my scanner and it came out blurry:-( (Sorry, Laura.) To see good pictures of Laura's beautiful "Tea Cup" cards, you will all have to go to Laura's website  The note cards were featured in the "Tea Time" magazine this month!I am not surprised: the card I received is beautifully printed front and back and Laura's delicate paintings of lace and teacups are absolutely gorgeous.

Congratulations and thank you so much Laura!
Posted by Christiane Kingsley at 8:43 PM 6 comments: 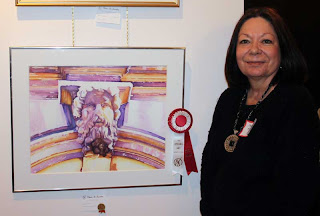 I was thrilled last night at the Annual Ottawa Art Association Juried Show to learn that my painting "The Protector" had won the first prize award in the watercolor category.
Posted by Christiane Kingsley at 11:25 AM 14 comments:

"Pierre the Green Man" is progressing. It is slightly more than 50% done. 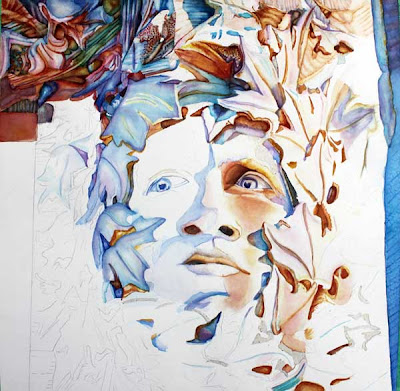 Since this is a commission, I really want to get the best resemblance to the original carving. Here is one of the photos that I am working from... 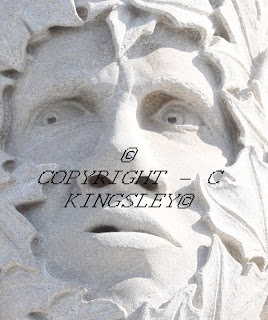 Do you think that I am close enough to the original on the left hand side of the painting?

Working on commissions make me tense, so to relieve tension I have been doing some fun mixed media: here is one that is almost finished of an Inukshuk. 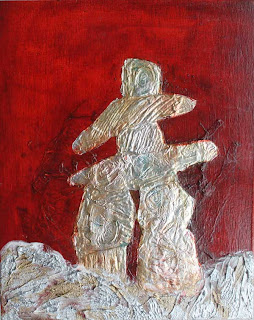 It's 8" X 10" on a 1.5" cradled board; it has an acrylic background with texture and design of tissue paper, molding paste, metallic foils, metallic paint.  I think it's cute:-)
Posted by Christiane Kingsley at 3:36 PM 12 comments: 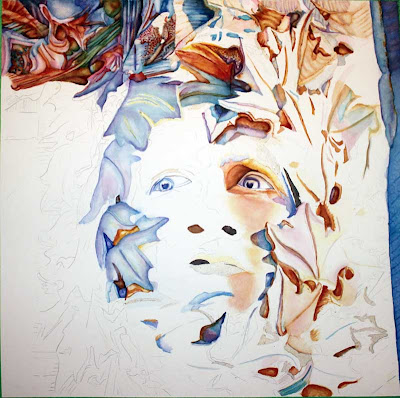 I have not posted much lately. Where does all the time go? For the past three weeks, I have been working off and on on my second watercolor of a "Green Man"  You may remember "Angus, the Green Man" from one of my February posts; it was one of three stunning Ottawa sculptures commissioned by Bobby Watt of RJW-Gem Campbell Stonemasons Inc. While the first sculpture represented Mr. Watt's move from Scotland to Canada through the symbols of the thistle ( emblem flower of Scotland) and maple leaves ( symbol of Canada), this time, the sculpture is called "Pierre, the Green Man" and it represents Mr. Watt's move to Quebec through the use of not only maple leaves, but the "fleur de lys", symbol of the province of Quebec: see the fleur de lys in the upper left corner.

I am progressing slowly on this one." I have had my son and my daughter over for the long weekend, I had several appointments etc...And...it's not an easy painting:-) The eye on the right-hand side is extremely important since it really becomes the focus of the painting...I have tried really hard to get it right. The other eye is currently just sketched in.  While "Angus" was very whimsical, this "Pierre" has to look almost like a real person hiding behind the leaves.

I am not sure I like the colors so far: the top is very dark and subdued...This photo was taken with a flash, so the colors  are not very accurate.  If I don't like the final version, I could always redo it - I have taken several photos of "Pierre" from several angles:-)

What do you think?
Posted by Christiane Kingsley at 7:04 PM 16 comments:

Christiane Kingsley
Ottawa, Ontario, Canada
I am a watercolor, acryli,c oil and mixed media artist from Ottawa, Canada. Many of my paintings are inspired by stonework: carvings, sculptures, gargoyles of different cultures and those found near me on the Gothic facade of the Canadian Parliament building. One of my other loves is floral painting: peonies, magnolias and waterlilies are nature's little jewels. I am a juried member of the Foyer Gallery at the Nepean Sportsplex, Ottawa. I participate in many solo and group shows every year in the Ottawa area. Email: chris_kingsley@hotmail.com

For purchase, email me for info and a PayPal link

New on this blog: networked blogs

All images on this blog are copyrighted.

All images on this blog are copyrighted. They may not be reproduced or used for any purpose without the written permission of the artist, Christiane Kingsley.